What is an Alpujarra? And why would you want to eat it?

I've been meaning to do this for a while, and so, with the end of my working year approaching, now seems the right time to get onto my backside and start blogging.

Those arriving early to this blog will know who I am, so let's skip the biog and answer a couple of fundamental questions.

What is an Alpujarra? 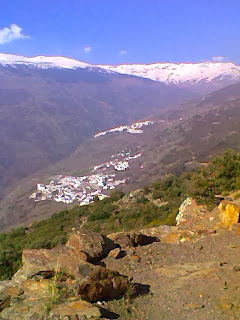 It's a foothill, specifically a foothill of the Sierra Nevada mountains in Andalusia, in the bottom right-hand corner of Spain. It's usually referred to in the plural, as in Las Alpujarras. Why? Because there are many of the blighters. The Alpujarras refers to the hills and valleys on the southern slopes of the Sierra Nevada that straddle two of Andalusia's eight provinces: Granada in the west, and Almería to the east.

The Alpujarra granadina is the better known part because it boasts the more dramatic landscape, is more populous and better lends itself to tourism and agriculture; the two mainstays of the local economy. The Alpujarra almeriense somewhat hides its light under a bushel, usually one of grapes, if they were ever to be measured in bushels. It's a little lower in altitude, drier and less showy, but none the worse for all that.

The area's really a long, thin strip of territory a hundred kilometres wide and no more than twenty deep, following the course of two rivers: the Río Guadalfeo, rising above the village of Bérchules (where I live) and emptying into the Rules reservoir just south of Granada; and the Río Andarax, which spurts out of the mountainside above another village, Laujar and heads due east, skirting the desert of Tabernas and dribbling (usually) into the Med just outside Almería city.

Why would you want to eat the Alpujarras?

Well, you get peckish, don't you?

Apart from bordering one of the remaining true wildernesses left in western Europe, the Alpujarras is a seething, flourishing, fenceless allotment of produce. You could almost plant a kidney stone in the Alpujarras, and four months later harvest a paté. Almost anything that can withstand the extremes of the climate will grow in profusion, whether lovingly tended or neglected; believe me, I've tried both methods!

As some of you may know, I earn a crust working in the kitchen and dining room of a boutique hotel in the area, and I bloody love it!  The best thing is working with all these amazing fresh products, strictly according to season, and turning them into meals that our visitors tell us they enjoy so much. I do a bit of the cooking, mostly preparing desserts, jams and preserves, but the real star of the kitchen is my colleague, the legend that is Sole, more from and about her later.

So, I exhort you to Eat The Alpujarras!  I mean to use this space to share recipes, ideas, observations and stories about the food I, friends, colleagues and neighbours make and share; the ingredients we acquire from the land; and the people and places that produce it all.

This isn't intended to be some academic record of the culinary history of the area however; many of the recipes will be my own and would make my Alpujarran-born compadres blench. Some will be hybrids of traditional and imported ethnic ideas, what we've started to call Moorish Fusion cuisine; that's the kind of food we prepare at Las Chimeneas, strongly influenced and mentored by our friends from the Moro restaurant in London. And then, of course, there will be the classic local dishes that make up the Alpujarras' food heritage. That tradition is about robust, no-nonsense country food that could be described as being to Spanish cuisine what Provençale cooking is to French: soups, stews, salads, cured meats and air-dried hams and vegetables, loads of pulses, blossom honeys, fresh and wild herbs and fruits straight off the branch.

... and booze! Please don't forget the booze. There'll be quite a bit about that too, cirrhosis permitting.

So, this is my personal food blog, coming to you live from the teeming metropolis of Alcútar, twin city of the megalopolis that is Bérchules (Pop: 643). Please feel free to chip in with comments and insults, that's what a firewall's for after all!